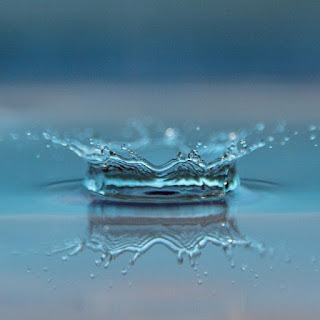 Water is continuously moving around the earth and constantly changing its form. It evaporates from land and water bodies and is also produced by all forms of life on Earth. This water vapour moves through the atmosphere, condenses to form clouds and precipitates as rain and snow. In time, the water returns to where it came from, and the process begins all over again. Although water is constantly moving, its total quantity on Earth’s surface is constant.(Water Facts)

Water is usually encountered in the liquid state, because this is its natural state when temperatures are between 0° C and 100° C. “Fresh” or drinking water is found as groundwater in underground aquifers, and on the surface in ponds, lakes and rivers. Seas and oceans account for 97% of all water on Earth; but their waters contain dissolved salts and are therefore unfit to drink. Solid – ice is the frozen form of water.

It occurs when temperatures are below 0°C (32°F). For a giving mass, ice occupies 9% more volume than water, which is why when water enters cracks in rocks and freezes it causes the rocks to crack and split. Gas – water is found in the atmosphere in its gaseous form, water vapour. Steam is nothing but vaporized water. In certain hot water springs called geysers, jets of steam and hot water rise one hundred feet or more from the ground. Geysers are found in Iceland, the North Island of New Zealand and in USA’s Yellowstone National Park.(Water facts)

In the forests, water seeps gently into the ground as vegetation breaks the fall. This groundwater in turns feeds wells, lakes and rivers. 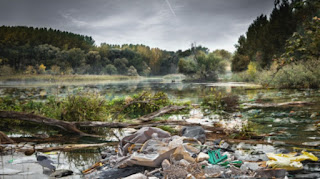 When toxic substances enters lakes, streams, rivers, oceans and other water bodies they get dissolved or lie suspended in water or get deposited on the bed. This results in the pollution of water whereby the quality of the water deteriorates affecting aquatic ecosystems. Pollutants can also seep down and affect the groundwater deposits

Water pollution has many sources. The most polluting of them are the city sewage and industrial waste discharged into the rivers. The facilities to treat waste water are not adequate in any city in India.

Presently, only about 10% of the waste water generated is treated; the rest is discharged as it is into our water bodies. Due to this, pollutants enter groundwater, rivers and other water bodies. Such water, which ultimately ends up in our households, is often highly contaminated and carries disease-causing microbes. Agricultural run-off, or the water from the fields that drains into rivers, is another major water pollutant as it contains fertilizers and pesticides. 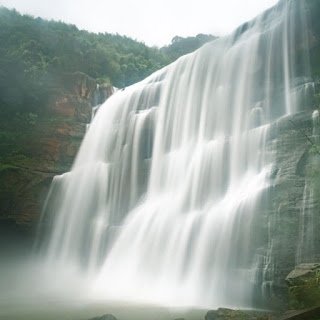 Our ancient religious texts and epics give a good insight into the water storage and conservation systems that prevailed in those days. Over the years rising populations, growing industrialization and expanding agriculture have pushed up the demand for water. Efforts have been made to collect water by building dams and reservoirs and digging wells; some countries have also tried to recycle and desalinate (remove salts) water. Water conservation has become the need of the day.

I. 75% of the earth’s surface is covered with water.

III. About 2% of the available drinking water is frozen leaving only 1% for drinking.

IV. The world’s average rainfall is about 850 mm.

V. Water regulates the earth’s temperature. It also regulates the temperature of the human body, carries nutrients and oxygen to cells, cushions joints, protects organs and tissues and removes waste.

VII. Blood in animals and sap in plants is composed mainly of water.

VIII. To cook 1 cup of rice you need 2 cup of water but to wash the pan in which it has been cooked you need 4-5 litres of water.

IX. A dripping tap can waste up to 6 litres of water in a day.

X. More than half the creatures on the Earth are found under water.

XIII. 10% of the earth’s surface is covered with ice.